It was the classic scene from Steel Magnolias – a Sunday afternoon in the hair salon and a group of women gossiping. One of the women was pregnant with her first. The once cohesive group quickly became divided at the topic of how the baby’s gender should be revealed.  It was now 3 against 1.  The three of us became exactly what every first time pregnant woman needs – a peanut gallery. 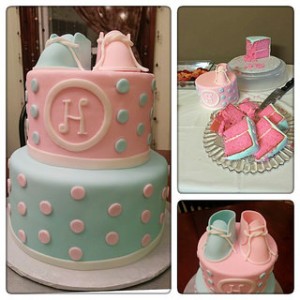 The grandmother-to-be offered to take a sealed envelope with the results to a specialty bakery and have a cake made to reveal the gender. I loved the idea! I pictured cutting the cake after a dinner party filled with anticipation. To add excitement, I would add a few touches. For one, I would set up a boy and a girl table. The guests would show which gender they guess by where they sat.  I’d also have a box of It’s a Boy and another of It’s a Girl gum cigars to hand out as a favor for sharing in the exciting news!  The challenge is the cake takes 3 days to make. The mother to be didn’t want to add additional wait time. Hey, I hear her! I personally couldn’t wait another second after knowing the information was available.  All three members of the peanut gallery had kids and we all found out our own way.  I had 2 kids and found out in the middle of an ultrasound with both.  I still remember my daughter crying when they told her she was going to have a brother.  Unfortunately, they weren’t tears of happiness, she was sad it wasn’t a cat.  Bottom line – you can’t please everyone.

If her only hold up was the additional 3 day wait, there had to be a solution!  I thought about having a bakery put together two boxes of cake pops.  One boy and one girl.  Take both to the appointment with a post it note on top labeling the boxes.  Give the boxes to the ultrasound tech to take out of the room and bring back the correct box without the post it.  The hospital staff could keep the other box as a treat for all of they special care.

Balloons don’t need much advanced notice.  Ask the ultrasound tech to write the gender on a piece of paper and seal it in an envelope.  Take a fun box that is ready to be filled with balloons to a local party store.  Tell them what you are doing and ask when to be back?

It then occurred to me that maybe the mother to be just wanted to find out in the moment like the rest of us.  I think we were all excited about the notion of a gender reveal party because it is something different.  Gender reveal parties weren’t as big of thing when I had my kids and my youngest is only 3.  It’s definitely a trending area.  Being a Libra I’m always looking for harmony and balance, so I thought there must be a compromise.  I had it – the parents could find out and have a gender reveal for their loved ones.  Not only does this appease everyone, it also opens up more options for the party! 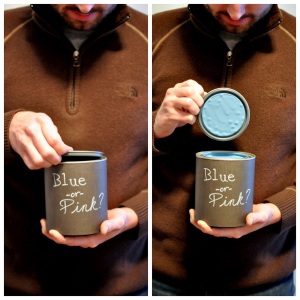 If you were planning on doing the nursery in the traditional blue or pink, you could invite friends and family over to help you paint the nursery.  The bonus for them is they get to see the color, the bonus for you is helpers!  I actually got this idea from Laura of http://anurseandanerd.blogspot.com/.  She does absolutely inspiring projects.  Visit http://anurseandanerd.blogspot.com/2015/05/the-great-scoutdoorsman-nursery-revealed.html to check out her finished nursery!  Spoiler alert – it’s adorable!

Who doesn’t love a good pinata?  I definitely think the pinata is under-used!  Imagine a pinata filled with candy in the corresponding color.  Enough said.

Sometimes it’s not always easy to get everyone together for an announcement or a party.  Sending a picture announcement could be just as fun.  It would be fun as a shower invite as well!  Get creative.

In the end it’s up to the mom to be.  We are all just excited for this little bundle to get here!  XOXO