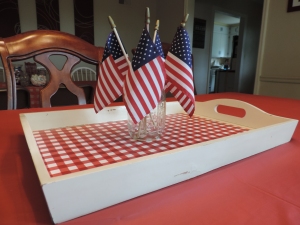 As I’ve mentioned, my son is a sports nut.  His birthday is in July, so it coincides nicely with baseball season and 4th of July, which made a baseball/Americana themed 2nd birthday a no-brainer.  I started with some simple table settings.  For the tablecloths I used solid red that I popped with a red and white picnic gingham check runner.  I had precisely ten thousand centerpiece ideas.  As always my thoughts were big – bigger than I could execute.  I had tried growing grass in little planters and was going to place a baseball at the center of each.  Well, my green thumb is actually blue and the grass never grew.  I should have reacted to the early signs, but the Pollyanna in me kept thinking it would miraculously sprout.  My reluctance to accept the truth lead to a last minute scramble for centerpieces.  I ended up ransacking the bin of 4th of July party supplies that I had just put away for some American flags.  I placed them in a simple mason jar and called it a day on table one.  For table two I grouped various sized vases and bowls and filled with baseball/Americana themed treats:  licorice, fun sized Baby Ruth bars, bubble gum, marshmallows and sunflower seeds.  I repeated variations of both on the five remaining tables.

Luckily the Brewers were playing an afternoon game on the day we wanted to have the party.  The first pitch was thrown an hour after the party began, which allowed time for our guest to arrive, say hellos and for the die hard fans to get some snacks and settle in for the game.  On Etsy I found a huge variety of baseball ticket invites.  The design on the one I chose was actually so good that one of the great grandpa’s thought we were actually going to the game.  I’m just happy we cleared up that confusion before the day of the party 🙂  I do think grandpa was onto something as I LOVE the idea of doing a tailgate birthday party at Miller Park when Noah is a little older. 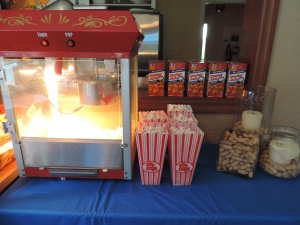 For the food I went as traditional baseball themed as possible.  The breakfast nook was transformed into a concession stand.  I had a table of peanuts, popcorn and Cracker Jacks.  For some added ambiance, I partially filled a couple jars with peanuts and placed a candle in the middle.

Any Brewer fan knows about the Klement’s Racing Sausages – Hot Dog, Brat, Polish, Italian and Chorizo.  It’s a tradition that dates back to the early nineties where giant sausage mascots race around from the 3rd base line past home to 1st base.  My intent was to serve all 5 options and the winning sausages would be whichever had the most eaten.  As I’ve mentioned in other posts, not all party planning ideas come to fruition and this was one of them.  I ran to 3 different grocery stores and could only come up with representation for 3 of the 5 sausages.  Oh well!  A friend of ours had a Brewer themed birthday for her little girl and actually got costumes!  She sneakily got the kids to go outside where the sausages came racing down the street.  I am proud to say I got to play the role of Hot Dog!  The whole thing came together perfectly and that day she made a memory for her little girl!

My sister knows me too well and is always great at finding the perfect gift.  She knows my love for party planning and the novelty items that go along with it.  At Christmas she had given us a hot dog steamer, which came in handy for this party!  Having 3 of the 5 racing sausages represented on the food table actually turned out to be a blessing in disguise as we had WAY too much food!  I took what I think was suppose to be a shower caddy from the Dollar Store and turned it into a silverware holder.  It’s hard to see in the picture, but I also used red baskets with red and white gingham liners for the plates.  These baskets have since been used a number of times for picnics and tailgates.  Another novelty item my husband, Ryan, requested for a birthday years ago was a nacho cheese dispenser.  While I mocked the idea at the time, I was certainly happy on party day that we had it 🙂 It was the perfect accompaniment to the nacho and soft pretzel station! 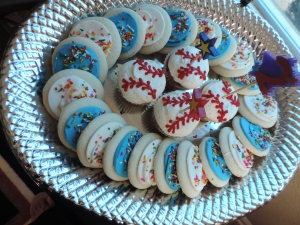 I love to cook, but am not much of a baker.  I’m working REALLY hard to get better, but I certainly cannot take credit for the desserts.  I worked with a local baker to make baseball cupcakes and Brewer colored cookies.  She was so sweet (no pun intended) and I love how they turned out!  As you can tell – Noah enjoyed them 🙂

Thanks for visiting the pARTy planning – where even the spelling of the word alludes to the fact that there is indeed an art to party planning!