In his 2015 edition, Webster defines a friend as, “a person you like and enjoy being with.”  I can’t say he’s wrong.  I like and enjoy being with all my friends.  But when I truly reflect on the friendships I am lucky enough to have, I feel as though he only provided a partial definition.  He left out the words:  family, soul mates and key confidants.  I don’t know that there are enough words in the English language to define what my friends mean to me.  I made a lot of poor decisions while I was growing up, but when it came to choosing my friends I’m proud to say, I nailed it!  We aren’t family by blood, but in the true sense that we have our traditions and our disagreements, but at the end of the day, we have an unconditional love for each other that supersedes all.  The friends who came into my life during my middle and high school years have stayed with me through college and we are now raising our kids to be friends.  After nearly two decades of friendship we often feel like we’ve been through it all together, but last week gave us the opportunity to celebrate something new – our first wedding vow renewal!

After 10 years of marriage our friends wanted to declare in front of an audience, comprised of mainly the same friends that were there for the original ceremony, that they would do it all over again.  Although, none of us had any doubts that they would do it again, I think the renewal was important not only because of their commitment to each other, but also as an excuse to get the band together and relive some of the shenanigans that took place at the original ceremony.

Our friends had often talked about renewing their vows on their 10th anniversary in Hawaii.  Busy lives, a set of adorable twins and a cross country move derailed those plans, so they decided to hold the ceremony in Milwaukee where it all began.  As a nod to the original plan we went with a Hawaiian Luau theme.

Cocktail hour started at 5 p.m.  In the words of Jimmy Buffett, “It’s 5 o’clock somewhere.”  The invite instructed guests to wear their most festive Hawaiian attire.  As guests arrived they completed their ensembles with a lei.  To display the lei’s we hung a Hawaiian flower sign on a tree and placed a plant hook in the ground.  The leis simply hung on the plant hook.

We took a crescent shaped bar that usually sits by our pool and placed it around a tree to serve as the bar for cocktail hour.  We again hung a Hawaiian sign on a tree for decor.  We kept the cocktail hour menu simple:  beer, wine and wopatui.  If my 4 years in college taught me anything, it was how to make wopatui – sorry mom and dad!  It had been awhile since college, so I went to the internet for a little refresher.  Turns out making wopatui is just like riding a bike – it all comes back quickly, along with the memories of days past 🙂  The good thing is there really is no wrong way to make it – unless you mix dark and light liquor or use powder instead of watered down juice (both were bad experiences I lived to tell about).  For the vow renewal we went with a simple light alcohol mix:  1 liter each of vodka, white rum, gin, triple sec and mixed it all together with some Hawaiian punch. 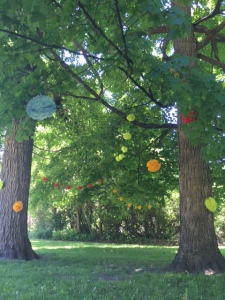 Originally we had planned a sunset ceremony, but then we were hit with the reality that the sun doesn’t set on command and we wanted the service to take place at 6:30, when it would still be light.  Oh well!  Despite the completely lit backdrop, it was still beautiful!  The bride-to-be-(again) painstakingly put together some pom poms and garland that we hung from two large trees in the front yard that would serve as the canopy for the service.

The service started with a warm welcome from the happy couple.  A good friend was the master of ceremonies.  He had originally agreed to get ordained, but later found out for a vow renewal you only need someone to serve as a witness.  His original agreement is just a testament to his character and the type of friends we have!  I must admit, I never pictured him to be a writer, but he proved me wrong by composing a beautiful speech that not only made the crowd laugh, but also eloquently summarized the life and love these two have together.  I firmly believe this vow renewal cemented him a role as the master of many future ceremonies.

As soon as the vows were over we tasked two friends with sprinting to the backyard and lighting the million tiki torches and votive candles as the crowd slowly made their way to the back.  To align with the theme we used green tablecloths with fringe around the sides to resemble grass skirts on the tables.  We topped the tables with centerpieces of a simple, bright flower arrangement and votive candles.  At each place setting we placed a simple sparkler favor.

Everyone pulled together to create a delicious dinner menu of pulled pork sandwiches, ribs, baked beans, cole slaw, potato salad and fruit.  We lucked out and our incredibly talented friend who is a pastry chef was flying into town for the renewal.  She literally showed up with her pastry bags and dyes in hand to decorate the cupcakes.

After dinner we got the original bridesmaids together for a snapshot 10 years later.  I must say, we have aged gracefully!  I’m already looking forward to our 20 year bridesmaid shot 🙂

The party then moved back to the front yard for a fire.  We hung out until the wee hours of the morning talking, laughing and reminiscing.

As I believe I have mentioned in almost every party related post, not everything in party planning goes according to plan.  I have a few areas in which my execution failed.  For starters, in lieu of a guest book I created a photo booth.  The idea was to have everyone write a note to the happy couple and take a picture with some Hawaiian props that would later be turned into a scrapbook.  FAIL!  I did not get one photo in the photo booth.  I think the issue was the booth was set up in the house and the party was mainly outdoor.  I also did not do a good job advertising the plan, so people simply didn’t know.

If you notice in the bar picture, none of the wine bottles have labels.  That is because I tasked the bride-to-be-(again) with the job of scrubbing the labels off all of the red wine, which turned out to be a wasted effort.  I had created a template for wine labels with the couple’s name and then the tagline ‘a lively cabernet/merlot blend, aged 10 years.’  A printer error prevented this from happening.

I had also planned to build little boxes like the ones I saw on http://www.lovelycraftyhome.com/2012/09/04/table-top-smores for centerpieces so we could do tableside smores.  It’s just like when I’m at a buffet table and my eyes are bigger than my stomach, my ideas for a party are always bigger than the time to execute.  Judging from the laughs we are still having and all the smiling faces, I don’t think anyone noticed anything was missing. 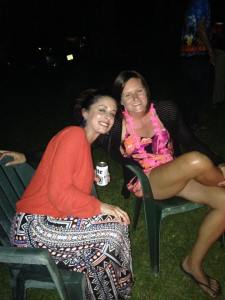 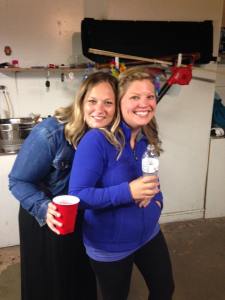 Thanks for visiting the pARTy planning!